The Skin Atopica Baby is a disease of the skin which causes it to swell, it is not contagious, but it is hereditary, it relates to a dry skin and easy to irritation, it is displayed with injuries that generate an itch acute and affects any part of the body.

You can see very commonly in babies from around the world, the majority of children suffer from this dermatitis before the age of five, and many children have asthma throughout childhood.

Babies can show sinthomatology with only 2 to 3 months of life and can be seen suddenly an eruption that leaves the skin dry, flaky and itchy. In this period, the skin can become infected and ooze so you have to be very careful. 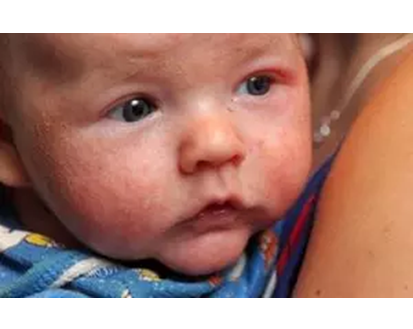 The areas of the skin where it is manifested in the Skin Atopica Baby is often on the face and scalp, especially on the cheeks. Although, it can also be seen in the body on the elbows and knees.

Babies tend to rub their skin against the sheets or carpets for calming the sensation of burning and itching , and in some cases the itching can be so severe that it prevents sleep with peace of mind.

As a result of the alteration of the skin barrier is revealed that the skin feels especially harsh countenance dry and the chronic inflammation causes a strong itch.

When suffering from this disorder have an increased susceptibility to developing infections of the skin, either generated by bacteria, viruses or fungi, as well as contact dermatitis, by the application of some topical drugs.

As an added bonus, the burning sensation this creates other problems such as difficulties using certain clothes, with physical activity, sleep disturbance, and by the awkwardness of the application of some treatments.

Then manifest this disorder, are prevalent some factors that cause your symptoms from getting worse or causing new breakouts, because the skin shows deficiency of hydration and an alteration in the metabolism of lipids epidemic.

This manifests by which the skin tends to be drier and the barrier function is altered. Some causes are:

Other factors that aggravate the situation of the skin atopic drink:

There are certain measures of general care that can be done to improve this disorder:

Hygiene of the Skin Atopica Baby

For the daily care of the skin of the baby only needs to follow some basic rules, such as:

The baby or child should be always checked by the pediatrician or dermatologist. Creams containing cortisone are the main element of the treatment of eczema outbreaks.

Although there are preparations that have different effectiveness, so you have to treat each case individually depending on the severity of the symptoms.

Antibiotics, antihistamines, or wet compresses are also very useful in some opportunities, as well as new immunomodulators in the most difficult cases.

The most important thing is to do a daily hydration with body cream type moisturizer and engrasantes, if the skin is very dry, it is recommended that you apply in the morning and in the evening.