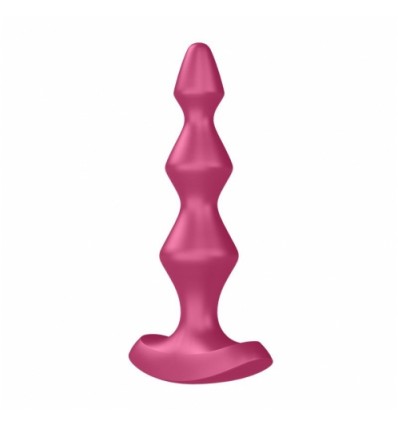 Its surface is softer since it has been made using silicone, while providing innocuity to the body, makes its introduction easier and originates a safer game as a result of its wide base in the form of "T".

Its design makes it can be used by women and men, as it creates a gentle massage on the prostate. In addition, it has a waterproof IPX7 finish, so it can be used in the shower, bathtub or private pool.

Its manufacture has been made using ultra soft and silky silicone of the best quality, so you will feel velvety to the touch and like a caress that will reactivate all the senses.

Using this plug does not generate any damage to the skin and has an anchor-shaped base that favors the prevention of any accident, so it has been made with a unisex design to be used by both men and women.

Its design includes a narrower tip that is quite simple to use, resulting in it being manipulated by beginners who want to explore its limits.

It has been included two extra powerful motors that emit vibrations throughout the device and has a quite silent operation that will not interrupt that special moment since it does not generate sounds.

For a better use and for a superior feeling it has 12 modes of pulsation and intense vibration, providing the option to choose exactly the level that gives you more pleasure and this is controlled with a single button.

In addition, it has IPX7 watertight that allows it to be used in the shower or bathroom, since it provides a high resistance to water and if mixed with hot water it will provide a more intense experience.