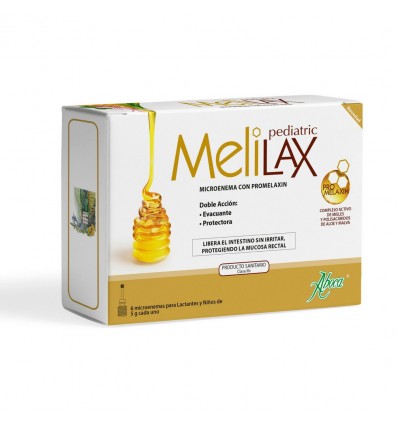 Melilax Pediatric 6 Microenema it has been formulated to offer an evacuating effect accompanied by a protective and soothing action of the rectal mucosa. This double action is generated because of your Promelaxin content.

It includes in its formulation a complex of molasses nectar honeys carefully chosen and created based on a content of mososaccharides, polysaccharides and melanoidins, with a high content of polysaccharide fraction extracted from Aloe and Mallow.

It causes an evacuating effect, since it creates a physiological and balanced stimulus of the activation of defecation, thanks to its properties that resemble those of mucus and its viscosity protects the rectal mucosa while the feces pass through the intestine. 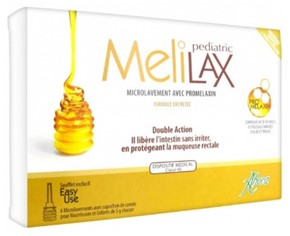 With its use they originate excellent evacuating actions, protective and lenient effects of the rectal mucosa, as a result of its content Promelaxin, which is a complex made from molasses nectar honeys.

These honeys have been selected according to their content monosaccharides, polysaccharides and melanoidins rich in the polysaccharide fraction of Aloe and Mallow, which exert an evacuating effect as a result of the creation of a physiological stimulus.

In addition, it helps balance the activation of defecation as a result of its mucus-like properties and viscosity, which protect the rectal mucosa while stool passes.

It contains components with special properties that generate as a result an antioxidant action that helps to provide greater protection and softness of the mucosa.

Melilax Pediatric 6 Microenema it includes components that originate excellent qualities that favor, protect and soften the mucosa, in order to improve the evacuation of children, such as:

Its components collaborate with the evacuation of the intestine, while generating the decrease of discomfort, irritation and inflammation that is accompanied by constipation, so its use is recommended as follows:

Melilax Pediatric 6 Microenema it can not be used in cases where you suffer from hypersensitivity or individual allergy to one or more ingredients of the formula.

When suffering from constant constipation it is relevant to consult a specialist to achieve the discard of any pathology. This product is disposable, reason why it should not be reused, even if only half is used, being the case of infants.