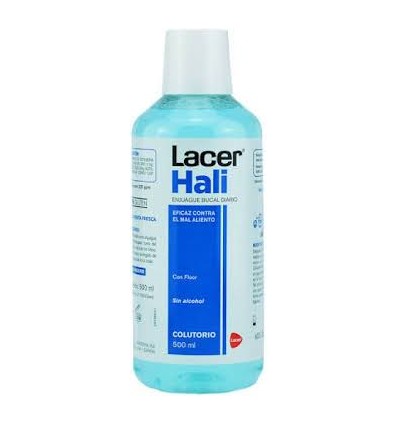 What is Lacer Hali Mouthwash 500 ml?

Lacer Hali Mouthwash 500 ml it is a product formulated to achieve a quick solution against the problem of halitosis, in a simple step that ensures an improvement in the breath of the entire oral cavity.

With its use, volatile sulfur compounds and excess bacteria are effectively eliminated from the oral cavity in order to eliminate and prevent the appearance of bad breath or halitosis.

Its formula includes beneficial components for oral health such as octenidine dihydrochloride, zinc chloride, fluorine and xylitol; while avoiding the use of alcohol in its formulation.

Why should Lacer Hali Mouthwash 500 ml be used?

The main action contained in this product is the effective fight against bad breath, achieving solves this problem provides good breath throughout the oral cavity for an approximate period of 72 hours.

It can be used as a complement to daily oral hygiene, so it is recommended to use after brushing to fight breath problems, since it manages to reach difficult areas to brush.

What are the features of Lacer Hali Mouthwash 500 ml?

This mouthwash has a formulation that favors the daily hygiene of the teeth, since it neutralizes the volatile sulfur compounds that cause the bad smell and prevents them from appearing again.

What are the indications of Lacer Hali Mouthwash 500 ml?

Lacer Hali Mouthwash 500 ml it is indicated for those who suffer from bad breath, as it neutralizes the volatile sulfur compounds that cause bad smell and prevents its appearance ensuring a good odor throughout the oral cavity.

It can be used daily after tooth brushing generating excellent results in children over twelve years and adults, since its formulation specifically combats the problems of bad breath.

How should Lacer Hali Mouthwash 500 ml be used?

This mouthwash should be used after daily brushing, rinsing the mouth at least 2 to 3 times a day without being diluted in water, keeping the product in the mouth for a period not exceeding one minute, it is not necessary to rinse it with water.

It can be used continuously as a regular cleaning, being used only as a mouthwash, so it is not recommended that it be ingested.