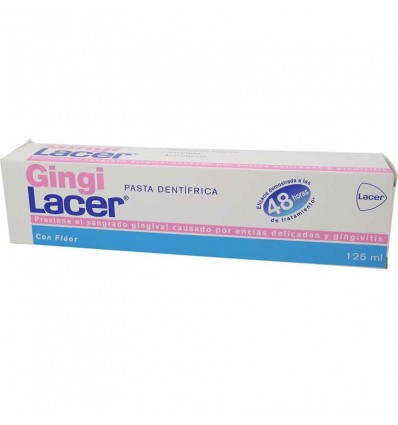 What is Gingilacer Paste 125 ml?

Ginger Paste 125 ml it is a toothpaste made with the aim of reducing bleeding that is generated in the gums at the time of dental brushing, with results originated in an average of 48 hours after continuous use.

Its composition has been developed to reduce the development of dental plaque and provide effective protection to the gums, while reducing the ailments generated by gingivitis, toning the gums and decreasing bleeding.

Its formulation has been enriched using a mixture of triclosan and zinc chloride, in order to eradicate plaque, while its content of xylitol provides care to tooth enamel after daily use.

How does Gingilacer Paste 125 ml work?

This toothpaste has a formulation that generates an improvement in the prevention of new inflammations that can be caused in the gums, while reinforcing the tooth enamel since it generates the following actions:

Its content of xylitol provides effective care to the tooth enamel, causing in turn the decrease in the fixation of plaque on the tooth and achieving an improvement in the conservation of the health of the teeth.

Its formulation includes zinc, since it is a fairly strong astringent that favors the reduction of gingival bleeding and improving the state of inflamed or bleeding gums.

Its Vitamin E content blocks the result generated by free radicals, while providing superior care to the gums against the aggression caused by dental plaque in the oral area.

With its frequent use it prevents the inflammation of the gingival tissues thanks to its enoxolone content that decreases the congestive and inflammatory processes to favor the eradication of the same, decreasing the inflamed and reddened gums.

In addition, it favors the toning of the gums, collaborating with the reduction of inflammation and bleeding making easier the epithelial repair of the gums, toning and strengthening them.

Who is Gingilacer Pasta 125 ml for?

Ginger Paste 125 ml it is formulated to be used by people over twelve years and adults who are going through a problem of gingivitis or who want to prevent its appearance.

This toothpaste has been formulated to be used every day, in order to provide faster results and last longer in the care of the entire oral area, causing more intense and effective results in the gums.