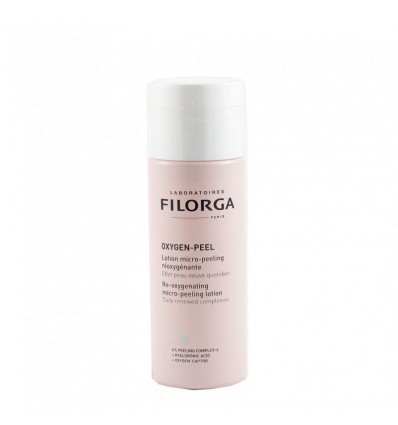 Filorga Oxygen Peel Lotion Micropeeling Reoxigenante 150ml it is a lotion with a reoxygenating effect, which generates its results by decreasing wrinkles, while increasing luminosity and unifying skin tone improving the appearance of the face.

It is a treatment that is recommended to reduce the results caused by pollution, stress, fatigue, tobacco, among others; especially when the skin has lost oxygen and the complexion is dull.

It can be applied to damaged skin in order to provide an improvement in its vitality, since it daily originates a micropeeling that adapts to all skin types resulting in renewed skin. 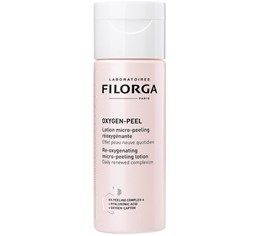 What benefits does the use of Filorga Oxygen Peel Lotion Micropeeling Reoxigenante 150ml generate?

This lotion has been formulated in order to generate a daily micropeeling and improve the oxygenation of the skin, resulting in a renewed skin effect every day, since it treats wrinkles, pore size, lack of luminosity and uniformity.

When applied it generates a triple action since it renews, densifies and oxygenates the skin, as a result of the generation of a shock treatment to originate a complexion of perfect texture. In addition, it generates an intense smoothing.

It includes a cocktail of components that improve the process of natural skin exfoliation and skin regeneration, while deeply hydrating and refreshing.

Its formulation includes pure hyaluronic acid of low molecular weight in order to improve hydration intensely and redensifies the skin.

At the same time it includes the multirevitalizing anti-aging complex of Filorga known as NCTF that improves cell regeneration to reduce the visible signs of aging and the union of these two components generate a good face effect, de-stress the skin and generate a healthy appearance.

It promotes cellular respiration thanks to its content of Oxygen-Captor complex, which includes bioactive oxygen captors that favor the propagation of oxygen between cells, resulting in a fresher and brighter appearance.

What are the feature of Filorga Oxygen Peel Lotion Micropeeling Reoxigenante 150ml?

Filorga Oxygen Peel Lotion Micropeeling Reoxigenante 150ml it includes in its composition a cocktail of elements that favor micropeeling, among which are glycolic, phytic, citric, salicylic, mandelic and gluconolactone acids. 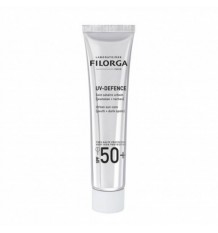 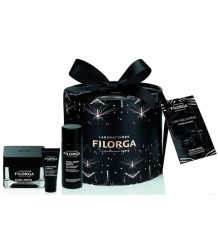 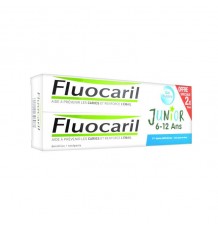