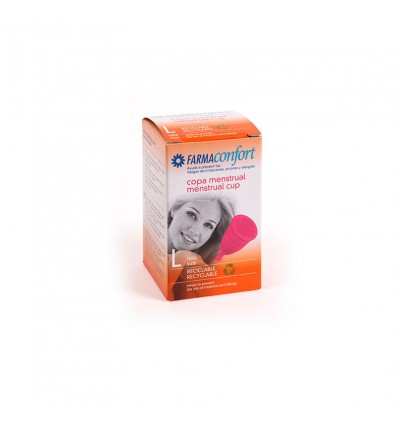 What are the Farmaconfort Menstrual Cup Size L Large?

Farmaconfort Menstrual cup Size L Large it is a quite natural option to the use of feminine hygiene products such as tampons or compresses, since it has the function of collecting menstrual flow during the period.

With its use it generates the retention of menstrual flow until the moment of its extraction, since it has a fairly simple application, being easier than the traditional tampon placement.

This size has been made with the purpose of being used by women of all ages, regardless of their physical state, including those who have had vaginal birth.

What are the benefits of using Farmaconfort Menstrual Cup Size L Large?

It is a product developed to provide superior comfort, since after placed it will not be noticed that it is worn, while its structure favors its use throughout the day, night and for the realization of any sport.

This cup provides long-lasting protection, since according to the amount of flow can be used continuously for up to 12 hours and generates an aid in the conservation of female intimate health.

It is a hypoallergenic product so it is made using Medical Grade TPE and does not include silicone, latex, BPA, or phthalates in its composition. It can be used by women who want a reusable and recyclable option.

The cup can be reused in order to avoid filling the bins with uncomfortable waste, while it is a recyclable product that favors the enjoyment of an improvement in hygiene and collaborates with the prevention of pollution of the planet.

The menstrual cup should be kept in the body for a maximum of 12 hours, but this will depend on the knowledge you have of its use and the amount of flow you have during menstruation.

It can be used during the night and for the performance of any sport, at the same time that it is compatible with the IUD or the diaphragm, avoiding that it has to be removed to urinate or make a belly.

For a better conservation of the cup should be stored in a plastic bag, or in airtight containers, being recommended the use of the cotton bag found in the case.

Farmaconfort Menstrual cup Size L Large it has been developed for the purpose of being used by women over the age of 25 years or who have had children by vaginal delivery and should only be used during menstruation.

How should be performed the emptying and hygiene of Farmaconfort Menstrual Cup Size L Large?

After removing the cup it is recommended to empty the contents directly into the toilet and wash the cup using drinking water, preferably that it is warm in order to prepare it for the next use.

It is advisable to perform an intense hygiene of the suction holes, using a soap with neutral pH that does not contain perfume.