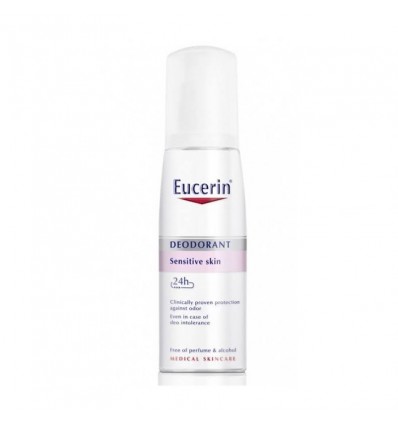 What is Eucerin Deodorant Spray 75ml?

Eucerin Deodorant Spray 75ml it is a deodorant specially formulated with softer components that take care of sensitive skin to the appearance of sweat, since it has a mixture of specially selected assets.

The formulation of this deodorant provides greater softness and provides superior protection against the appearance of bad smell, being able to be used with total confidence by those who have sensitive skin.

It generates excellent results in skin intolerant to common deodorants, since it has a superior tolerance for the skin and generates results that can last for up to 24 continuous after application.

What are the benefits of Eucerin Deodorant Spray 75ml?

It is a deodorant designed by the Eucerin brand in order to provide superior care to sensitive skin to the emission of sweat and prevents the appearance of bad smell, since it has a specially designed formula with softer ingredients.

For its application, a spray presentation has been used that makes its use easier, provides up to 24 hours of protection against the appearance of bad smell and its components are effectively tolerated by the skin.

In order to generate an improvement in skin care, components that can generate irritation, such as perfumes, alcohol, dyes and preservatives, are not used in its formulation.

Its mixture of ingredients contributes to the restoration of the natural pH of the skin, so this formula has passed numerous tests that have certified its successful results in the care of very sensitive skin.

In addition, it favors skin with atopic dermatitis and those who suffer from intolerance to common deodorant and eczema in the armpits.

What are the features of Eucerin Deodorant Spray 75ml?

This deodorant has been formulated with the purpose of providing superior care to skin especially sensitive to sweat, since it includes a fairly gentle formula that has a superior ability to prevent odor.

Who is Eucerin Deodorant Spray 75ml for?

Eucerin Deodorant Spray 75ml it has been formulated to be used by those who suffer from intolerance to the usual deodorant, eczema or atopic dermatitis, providing superior protection for up to 24 hours against the smell.

It includes a spray presentation that makes it easier to use and generates superior care for sensitive skin since it does not include irritants, perfume, alcohol, preservatives or dyes.