The electric toothbrush is a toothbrush which is used for dental hygiene, but do the movements quicker and more automatic, with a swing that goes from back to front, alternating the rotation between clockwise and counterclockwise.

These brushes are called rotary but his head made a rocking motion, also performs vibration at speeds sonic thanks to the fact that they contain an engine, which is fueled by electricity.

There are brushes that generate an effect of ultrasonic to make a better cleaning of the teeth, this effect is achieved through a piezoelectric crystal. 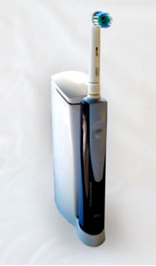 All models of electric toothbrush that there are, you can say that it generates an effect of rotation and oscillation reflects more benefits to the users that the manual toothbrush in the moment to remove the plaque and reduce the inflation of the gums.

Electric toothbrushes manage to eliminate up to 100% more plaque than other type of brush, achieving minimize the appearance of caries and other oral diseases, among them prevents the appearance of tartar with its frequent use.

Generate greater efficiency in the cleaning of hard to reach places, so they demand less skill and effort at the time of tooth brushing.

They have a higher efficiency, as a result of the movement of the bristles much faster generating that can be a mouth much more clean in less time.

Favor in the removal of stains from the teeth, such as coffee or tobacco, and prevent the onset of these. From the first time you can see the effects of these brushes in the teeth, achieving a better hygiene.

Another benefit of this type of brush is the possibility to change the different types of heads that exist depending on what you want to achieve, as well as to improve the results of the dental cleaning.

When choosing an electric toothbrush to display the advantages and disadvantages of each of them, as not all are created equal and you must choose the one that best suits the needs that you have.

Depending on the technology used is of two types, the brush roller by the rotation and the brush sonic/ultrasonic, which have as a main difference to the way they produce the movement.

Electric toothbrushes rotating contain movements pitching rotation and oscillatory clockwise and counterclockwise to help you build a cleaning of the teeth more quickly and without residue.

The frequency of its speed goes from the 5600 movements per minute, up to the 8800 mpm, which means that brushing with an electric toothbrush rotary minimizes the time of the session brushing.

Contains a head, round shape, which makes them much more practical and pleasing to the time to clean difficult areas, preventing damage at the time in which they are used.

The cleaning is achieved with this brush is superior as they leave the mouth clean and fresh, and it shows in the smile is the result from the first time you use this brush, because it removes more plaque.

Generate a care upper gum with the touch of a button and guiding it for a few minutes in the mouth, so you will need less skills and abilities at the time of brushing.

Thanks to the employment of the rotational swing that are induced by a motor located in the handle, this brush may be recommended to be used by people who have a condition nervosa in their hands or arthritis.

It includes an extended shank for access in a way more easily to the hard to reach areas on all the teeth. With this brush electric rotating the tooth decay does not lead to a problem, not to mention the gingivitis and tartar because it produces a more thorough cleaning.

The bristles and your head in a circular shape helps clean and remove residue that may cause stains on the teeth.

The smaller ones prefer this type of brush because they generate a better polishing and is achieved in less time, with better results.

In general, the batteries last for approximately fifteen days, so you do not need to worry about the exhaustion because they are rechargeable.

Electric toothbrushes sonic include a form of action based on heads that move at high frequency, which gives access to remote locations.

Their technology allows the brush to emit vibrations, high-frequency sound that generate vibrations in the horizontal direction, between 14000 and 31000 movements per minute, which gives an effectiveness much higher in the brushing.

The movement is mechanical and acoustic vibrations, make it two times better than other brushes, thanks to its double action of cleaning:

The vibrations of the brush, introduced in the saliva, a small amount of air to generate a few tiny bubbles that are rich in oxygen and are propelled toward the areas where the plaque builds up and the areas subgingival.

These bubbles are of benefit to these areas that have a low presence of oxygen and prevent the development of bacteria by the increase of the oxygen concentration.

For the bristles reach the difficult areas is possible as a result of the dynamics of fluids such as, for example, in the bottom of the gum line.

The people who have placed fixed orthodontic treatment may be used because this brush is able to clean underneath the area of the brackets with greater efficiency and removes plaque from the enamel.