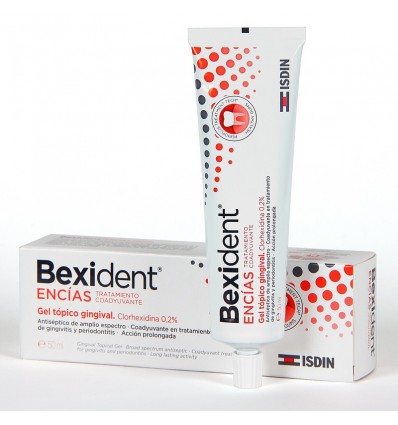 Bexident Gum Chlorhexidine Gingival Gel 50 ml it is a gel specially formulated to provide effective care to the gums, since its composition provides a beneficial antiseptic action thanks to its Chlorhexidine content.

Its formulation has been developed in order to generate an adjuvant effect in the decrease of the fixation of the bacterial plaque, while providing toning and regenerating qualities.

With its use it generates a decrease in inflammation of the gums with gingivitis and causes an improvement in periodontitis problems, keeping them in good condition and with results that last longer.

What are the benefits of Bexident Gums Chlorhexidine Gingival Gel 50 ml?

This gingival gel has been formulated in order to reduce the development of bacterial plaque in an effective way, since it has a beneficial content of chlorhexidine that generates an antiseptic effect.

At the same time its composition has been elaborated to cause an adjuvant effect in the care of the gums, since it includes an excipient that decreases the fixation of the bacterial plaque.

with its frequent use it reduces the inflammation that originates in the gums deteriorated by gingivitis, collaborating with the improvement of your health and favoring your state since

Its formulation has been elaborated without alcohol, includes a delicious and pleasant flavor, while it has a capacity of fixation to the gum that provides results that last longer.

What are the Properties of Bexident Gums Chlorhexidine Gingival Gel 50 ml?

This gingival gel has been formulated to provide toning and regenerating properties, while favoring the reduction of inflammation of the gums with gingivitis and in problems of peridontitis, as a result of its content of:

Bexident Gum Chlorhexidine Gingival Gel 50 ml it has been formulated in order to prevent and function as an adjuvant in periodontal, preimplantation treatment and in periodontal and maxillofacial surgery.

How to use Bexident Gums Chlorhexidine Gingival Gel 50 ml?

It is advisable to use this gingival gel two or three times a day after meals and do not consume any type of liquids or food during the half hour after its application, it should not be rinsed, or ingested.

It is recommended to be applied at night before sleeping, in order to generate its antiseptic effect while sleeping.