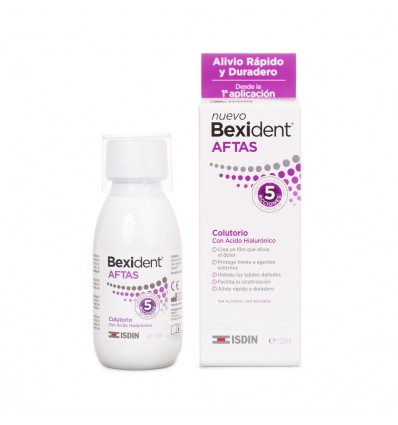 Bexident Canker Mouthwash 120 ml it is a mouthwash formulated for the area of the mouth in order to generate greater protection against the appearance of antlers, while collaborating with the reduction of the sensation of pain caused by rubbing, sores or wounds.

It can be used when you have oral lesions that have originated as a result of the use of orthodontics or dental prostheses, thanks to its content of hyaluronic acid and Advanced Hyaluronfilm Tech technology.

This mixture of components generates a protective screen, which helps in the relief of pain caused by wounds and promotes healing quickly and safely.

It includes an innovative formula that includes among its components the origin of Avanced Hyalurofilm Tech that collaborates in the development of a protective film in canker sores and mouth ulcers, favoring the hydration of the damaged area improving its healing.

These components provide greater protection of the area against various external agents, providing an accelerated improvement to the pain and discomfort that are caused by the appearance of canker sores.

The use of this mouthwash favors the treatment of numerous and blurred canker sores throughout the area of the mouth including the gums, the tongue, among others. In addition, its formulation does not include alcohol or gluten resulting in improved healing and reduced pain.

Bexident Canker Mouthwash 120 ml it has been developed using Advanced Hyalurofilm Tech as the main component combined with hyaluronic acid, in order to generate a protective film that reduces the sensation of pain caused by the sore.

The use of Bexident Canker Mouthwash 120 ml it is specifically indicated to care for and treat the appearance of canker sores or ulcers that are caused by trauma, by rubbing with orthodontics or dentures.

Its application reduces the deterioration of the external tissues of the oral cavity that cause feeling of pain and/or inflammation, prevents the appearance of aphthous stomatitis recurrent ulcers, blisters, or traumatic, caused by orthodontic treatments or dentures.