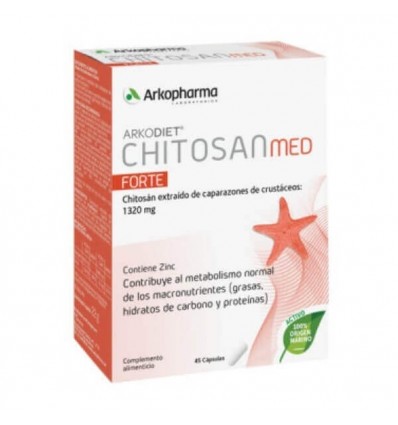 What is Arkodiet Chitosan Forte 45 Capsules?

Arkodiet Chitosan Forte 45 Capsules it is a food supplement made from Chitosan, since it is a natural compound from chitina that favors weight control, since it prevents the absorption of fats by the body.

Chitosan is a fiber of marine origin that, when consumed in the company of water, ignites generating its actions as a network, so it effectively absorbs fat from the food we eat and generates that the caloric intake of the fat we consume is zero.

This component is known as fat burning, although this is not its direct occupation, since it does not exclude fat, but prevents it from being absorbed during digestion.

Why use Arkodiet Chitosan Forte 45 Capsules?

There are people who have a balanced diet and usually perform physical exercise every day, but it is difficult for them to reduce those extra kilos and require help that helps them with the reach of that figure they want so much.

This supplement made by Arkopharma is formulated with the purpose of collaborating with weight control thanks to its content of chitosan, which is extracted from the shells of certain crustaceans and prevents the absorption of fats.

Resulting in an effective decrease in the amount of fat calories that are ingested in the daily diet, so it has been mixed with Zinc to generate an increase in the normal metabolism of fats, carbohydrates and proteins.

This supplement includes an excellent amount of fiber that can immobilize up to 5 times its own weight in fat, resulting in a decrease in the fat we eat at a meal, on average 15 to 20%.

This food supplement has been made from chitosan which is a product derived from chitine and is a natural polymer obtained from the cuticles of marine crustaceans, while it is biodegradable and does not generate side effects.

As it is a fiber of marine origin it is not absorbed or digested, so when they reach the stomach and come into contact with an acidic environment, it retains the lipids that are present in food to be discarded later by excretion.

A portion of the fat ingested in food is trapped by chitosan and transformed into non-absorbable, so a zero caloric value is generated and can absorb up to 5 times its own weight in fat.

With its consumption it generates an aid in the conservation of a healthy weight, especially if it is added to the daily care routine as a result of its content based on chitosan and zinc that favors the normal metabolism of macronutrients, such as fats, carbohydrates and proteins.

Who is Arkodiet Chitosan Forte 45 Capsules suitable for?

Arkodiet Chitosan Forte 45 Capsules it is formulated to be ingested by adults who need a collaboration in conservation or weight loss.