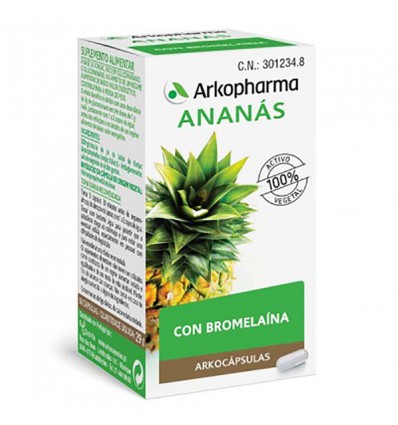 Arkocaps Ananas 48 Capsules it is a food supplement that includes a large amount of bromelain, which generates excellent results in the reduction of excess localized fat that generates cellulite as a result.

Its consumption helps to fragment macroproteins in order to improve their digestion and favors their elimination from the body. In addition, it helps fight against excess weight that is related to fluid retention or when there is a cellulite state.

By dividing the proteins and separating the cellulite tissue it helps to generate the desinfiltration, mobilization and expulsion of fat storage.

Additionally, it generates an anti-inflammatory effect that helps reabsorb localized edema, which are related to fat deposits, bruises, fractures, sprains, dislocations, among others.

How can Arkocapsulas Ananas help me 48 Capsules

The Arkocapsulas Ananas they include in their composition bromelain that helps prevent the increase of insulin in the blood that originates from the absorption of foods that include a large amount of fast sugars and as a result generates its action in the accumulation in the form of fats.

It originates a proteolytic effect similar to papain, since it generates its work in the stomach and intestine generating as a consequence a better digestion of proteins.

In addition, it deteriorates the protein molecule to generate smaller ones as a consequence, while releasing amino acids that are easily absorbed by the body.

Its anti-edematous and anti-inflammatory action generates an increase in tissue permeability by withdrawal of the natural production of prostaglandin E2 or PGE2.

Its bromelain content acts on the metabolism of eicosanoids, partially depriving the isolation of thromboxane synthetase and reactivates the natural development of a compound with anti-inflammatory and vasoconstrictor effect.

Bromelain reduces platelet aggregation, which is induced by collagen, by partially encircling thromboxane synthetase, as opposed to aspirin and NSAIDs that frequently inhibit cyclooxygenase.

As a result it helps in the prevention of myocardial infarctions and angina pectoris; while avoiding the appearance of thrombosis and thrombophlebitis.

According to studies it was observed that the consumption of bromelain reduces the symptoms of angina pectoris, depending on the rigidity of coronary sclerosis, since this component has the ability to deteriorate fibrin plaques in blood vessels.

It indicates the intake of Arkocapsulas Ananas to treat and avoid digestive disorders such as hyposecretory dyspepsia, functional dyspepsia due to gastric secretory insufficiency, exocrine pancreatic insufficiency, irritable bowel, aerophagias and flatulence.

In addition to delicate digestions with a feeling of heaviness and swelling after meals, digestive atonies, chronic gastritis, diarrhea, constipation or constipation, intestinal worms, hemorrhoids. It also generates its excellent action against other problems such as:

How should I take Arkocapsulas Ananas 48 Capsules

It is recommended to take 2 to 3 capsules before breakfast and dinner with a large glass of water.