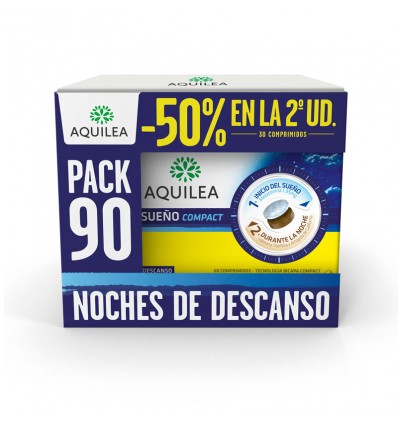 Aquilea Dream 1.95Mg 60 Tablets + 30 Tablets Pack it is a pack formulated to collaborate with the initial sleep conciliation and favors its conservation throughout the night, causing an improvement in physiological rest.

For its elaboration, bilayer technology has been used, where the first layer emanates the components in a faster way, releasing Melatonin to improve conciliation and reduce the time in which we fall asleep.

It is recommended Buy these tablets already contain a second layer, which emanates Valerian, Passionflower and Californina Poppy in a rather slow way, preserving sleep throughout the night and the various physiological phases of a restful sleep

This pack of tablets has been formulated with the purpose of collaborating with sleep and its conciliation thanks to its bilayer format that releases all its active ingredients at the moment when they are required during the night to generate better results.

It includes an initial layer that contains melatonin and causes this component to be released in a faster way to make it easier to fall asleep by reducing the time.

At the same time it contains a second layer that includes plant extracts, such as valerian, passionflower and poppy that are released throughout the night to get a totally restful sleep, without night awakenings.

It can be purchased at Offer in our parapharmacy in order to generate an improvement in all phases of sleep as a result of its content of natural ingredients, so it does not include lactose, nor added sugar and can be consumed by celiacs.

Get the best prices on offer from Aquilea Sueño 1.95Mg 60 Tablets + 30 Tablets Pack at Farmacia Market

This pack is in our parapharmacy at an excellent price Price, as it contains a total of 90 bilayer tablet, which includes a first layer of melatonin and a second layer containing a mixture extracts of Valerian, Passionflower and California Poppy.

With its consumption, an improvement in sleep is generated, making it restorative, since its components are released as required to improve and preserve each of the phases of sleep using a selection of natural components.

Aquilea Dream 1.95Mg 60 Tablets + 30 Tablets Pack they are specially made tablets using bilayer technology, so that with their intake a restful rest is generated since it intervenes in all stages of sleep throughout the night.

In addition, as a result of the use of the bilayer compact technology this tablet for the improvement of sleep and has been made with a smaller size, retaining the same effectiveness as always.